Last weekend was our dear friend Josh’s birthday. We got the whole gang together and made our way up to Disney World to celebrate the best way we know how- with Mickey Mouse! We managed to all get up super early, and left Tampa at 5:15 in the morning so we could have a fair shot at getting boarding passes for Hollywood Studios’ newest attraction at Galaxy’s Edge, “Star Wars: Rise of the Resistance”.

We managed to park and get in to the park about 30 minutes before they opened, which put us in good shape to snag a decent boarding pass- in fact, we got number 40! Once we were properly checked-in, we thought we’d run over to Hollywood Tower of Tower and see if it was still haunted and…. well… you can see for yourself!

That certainly put a jolt in our system after an early morning!

Hollywood Studios is also home to Toy Story Land, so we headed over to check out how Woody and the gang were doing. 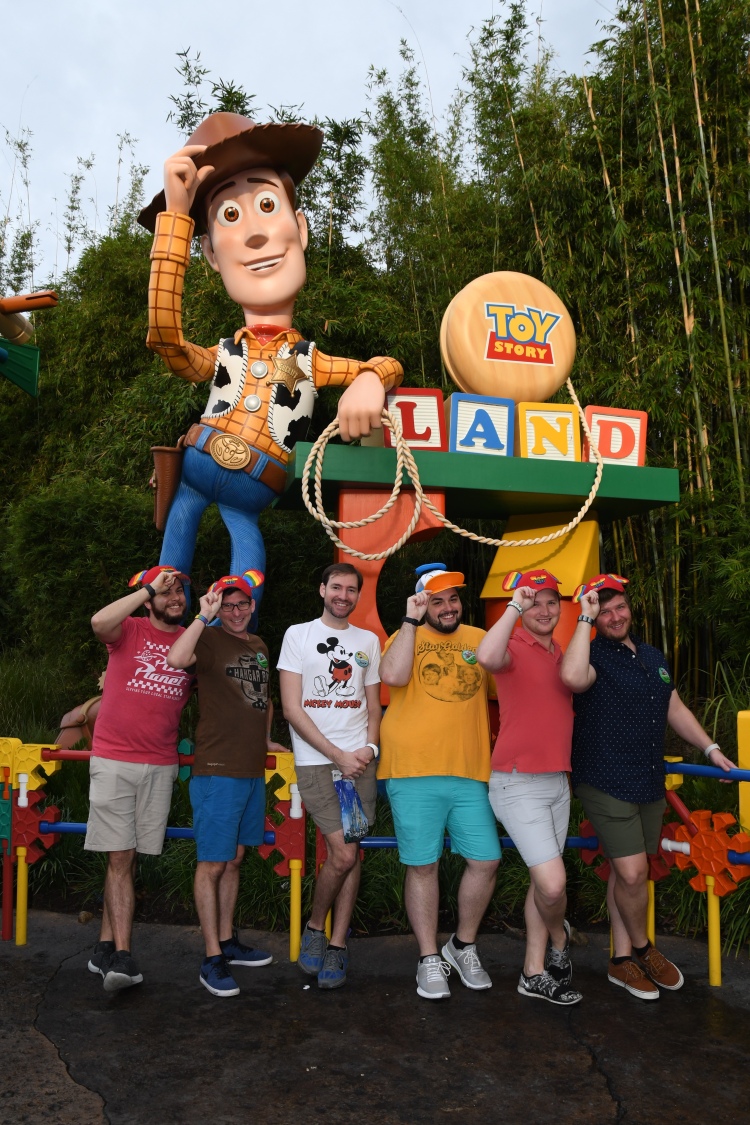 Did you know? Toy Story’s first movie came out over 24 years ago! How wild is that?? It was a first-of-it’s kind, as it was the first full-feature film to be 100% CGI (Computer Generated Imagery). CGI technology has come a long way since the first Toy Story, but there’s something nostalgic about the classic CGI animation, isn’t there?

As it so happened, the back-entrance to Galaxy’s Edge (The Star Wars themed area) was open! So we headed directly from Toy Story Land over to Galaxy’s Edge. If you haven’t been yet, it’s well worth a Disney ticket. The scenery, the cast members, attractions, and even the food are all on-brand with the Star Wars franchise.

While waiting for a photo-op, we had the rare opportunity to see Rey sneaking around, avoiding the First Order soldiers! She was quick, but here’s a small glimpse as she ran past us: 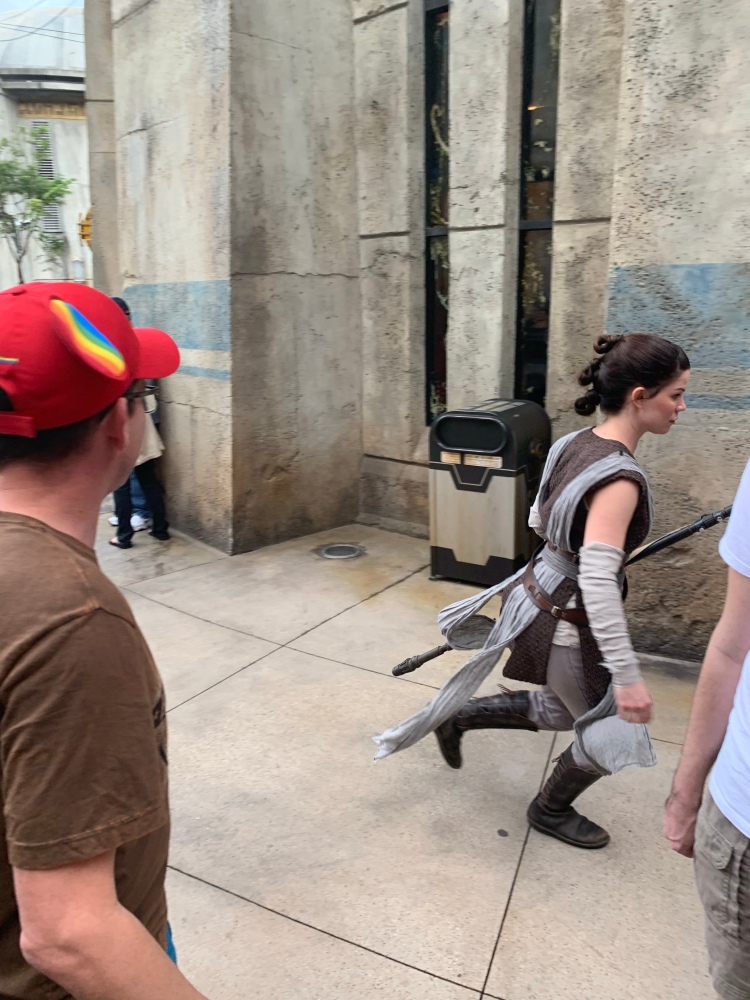 After the coast was clear, she found Chewie and they made their way back towards the Millennium Falcon 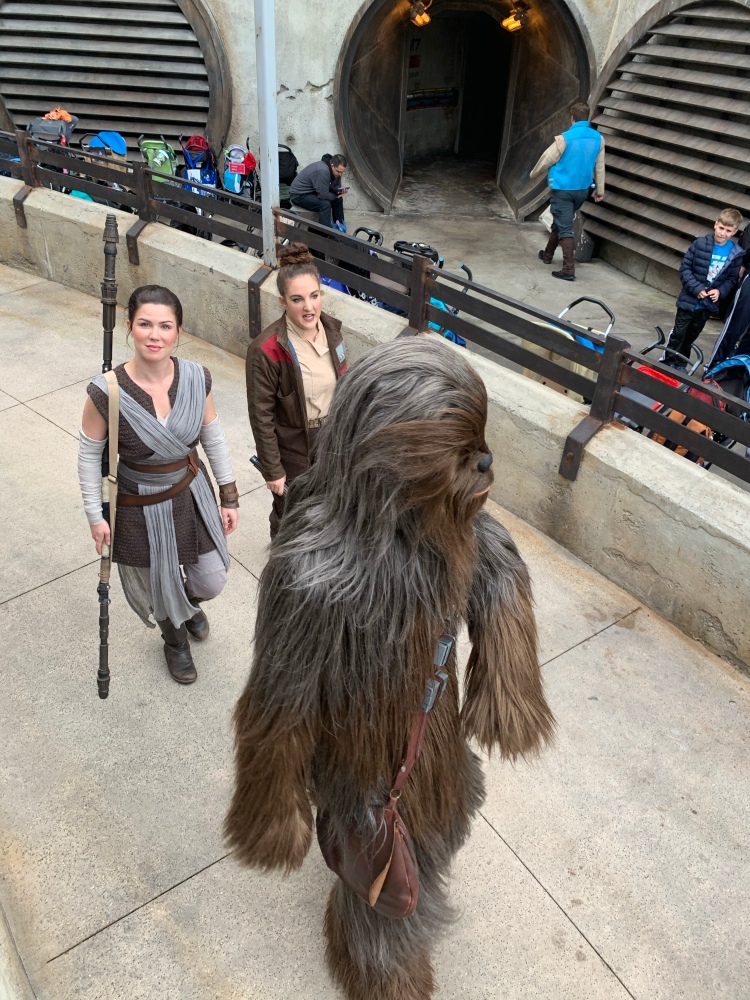 Star Wars: Galaxy’s Edge happens to be home to 2 of Disney’s incredibly fun ‘Super Zoom Magic Shot’ photo experiences, and thus is the reason we were standing in line for a few pictures. Check out the super zoom along with a few pics below: 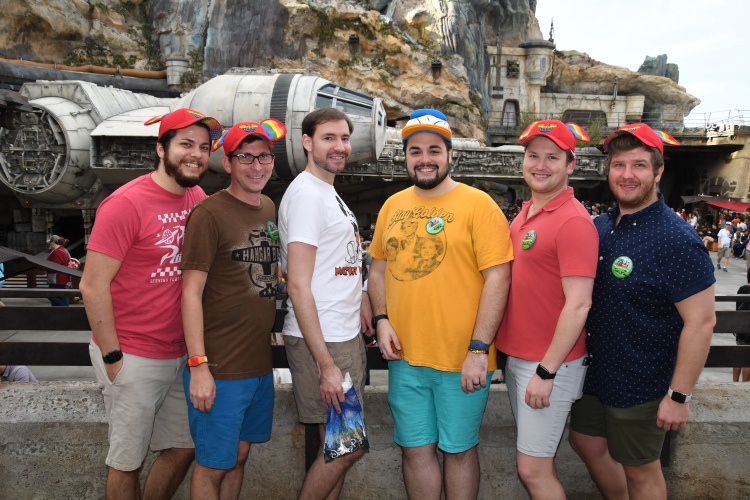 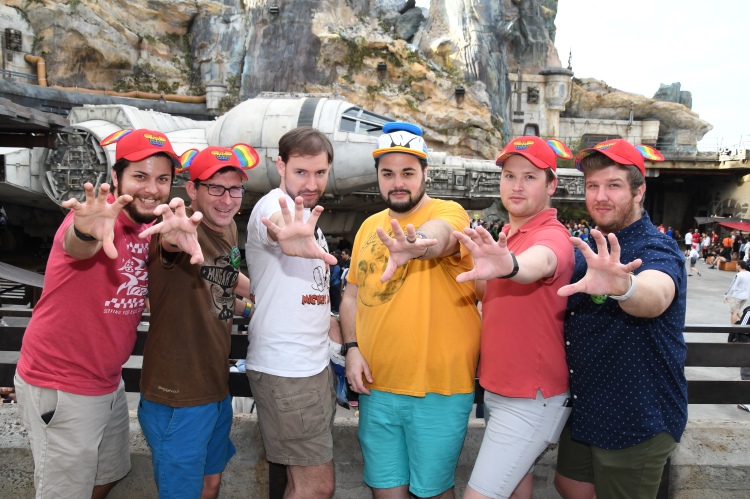 We were really feeling the Force flow through us, and weren’t quite ready to leave Galaxy’s Edge yet, so we decided to get into the standby line for Millennium Falcon: Smuggler’s Run. The wait wasn’t too bad! Under 2 hours, and they have a fantastic way to keep you distracted and help the wait time go by faster with a game. Disney developed a gaming app just for the parks called Disney Play. Based on your location from your smartphone, it knows where you are in the parks, and allows you to play interactive puzzles and trivia games. For Smuggler’s Run, you’re on a special mission to infiltrate the First Order’s ship plans. You scan barcodes on crates in the queue line, solve problems, and send over de-coded files to your resistance buddies. It’s pretty neat!

Since we were a group of 6, we fully-staffed our trip on the Millennium Falcon. Here we are excited and nervous for our first flight together: 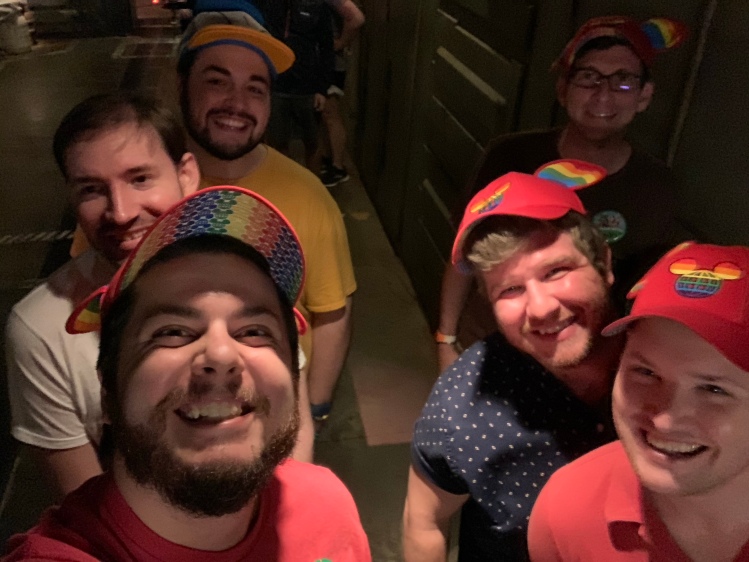 Luckily we managed to get back safely… phew!

Just as we exited Smuggler’s Run, OUR BOARDING PASS WAS CALLED!! Woo-Hoo!! The timing couldn’t have been any better. We headed on over to get in line for Rise of the Resistance.

If you aren’t a fan of sneak-peaks or spoilers, DO NOT click play on the video below. It shows our ride experience on the brand new Rise of the Resistance ride. There are no videos that could possibly do this attraction justice, so if you have been debating getting tickets to see Disney in the near future, I would HIGHLY recommend going, especially for this experience!

It’s immersive, it’s engaging, and it’s like no other attraction Disney has made to date. Hands-Down the best ride I’ve ever been on!

After all of our inter-galactic travels, we worked up quite the appetite, and we happened to have reservations at Liberty Tree Tavern, located in Magic Kingdom. We made our way back to the front of Hollywood Studios, and moved our cars over to the parking and transportation center. We were a bit surprised when we got there at how incredibly busy the lines were for both the monorail AND the ferry boat that day! We waited at least 30 minutes and multiple boat-loads before we were able to board a Ferry to Magic Kingdom. We were sad to miss our first Fast Pass, but most of us were more focused on how starving we were anyways…

No pictures  from Liberty Tree Tavern, but they sat us within 15 minutes of checking in which was good. Service was reasonably quick, and the portions there are GIGANTIC- Josh, Christian and I ended up ordering their buffet-style option. $39/person (-10% Annual Passholder Discount) gets you an all-you-can-eat 3 course meal, including a drink. Not a bad price when you’re talking lunch at Disney!

Magic Kingdom was fun as always- we navigated through pirate-infested waters, soared through Space, and enjoyed learning about the Wheel of Progress, one of Walt’s pride and joys from the 1964 New York World Fair. Here’s a few more pics of our adventures in Magic Kingdom: 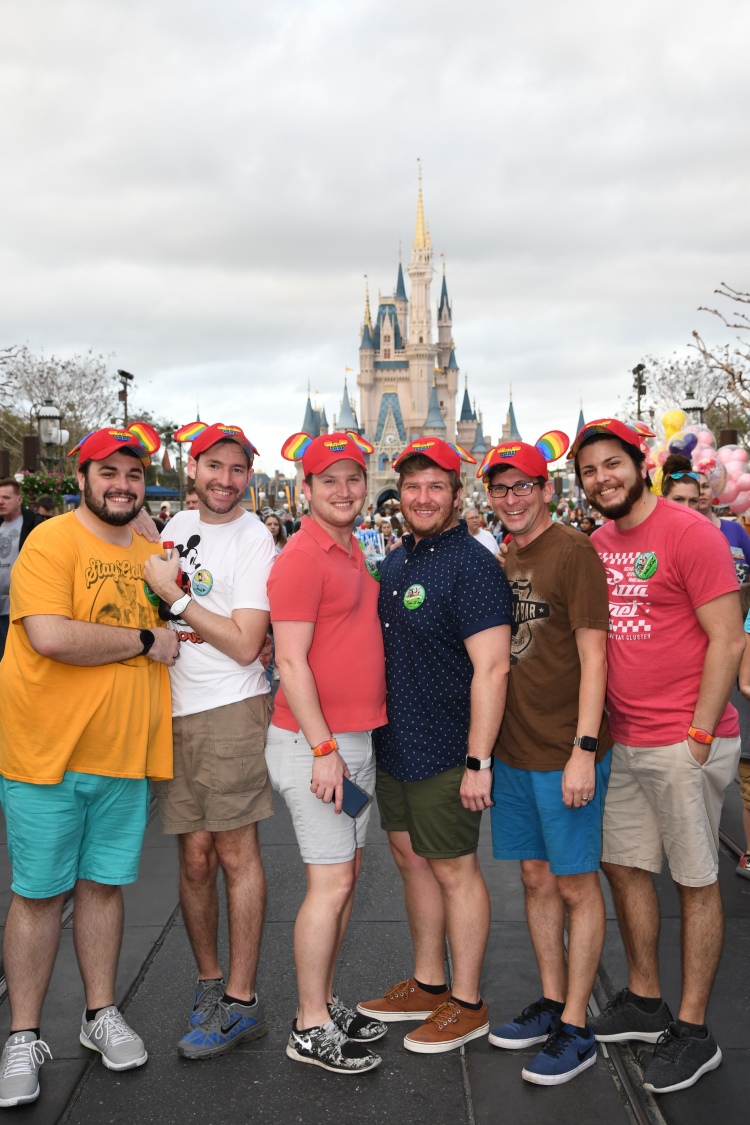 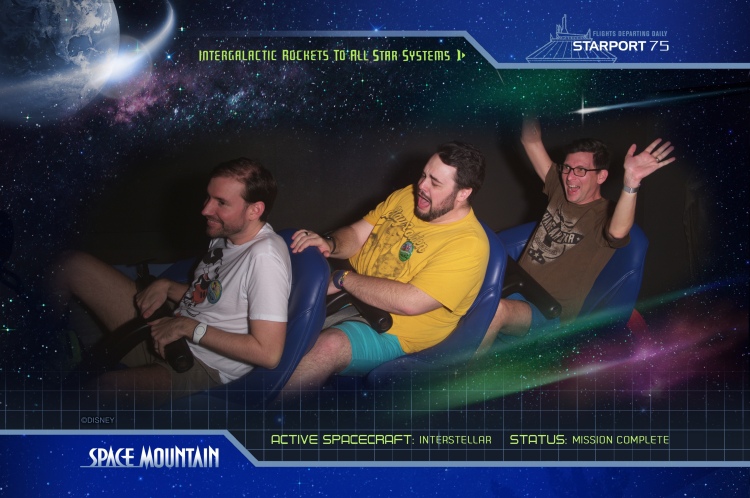 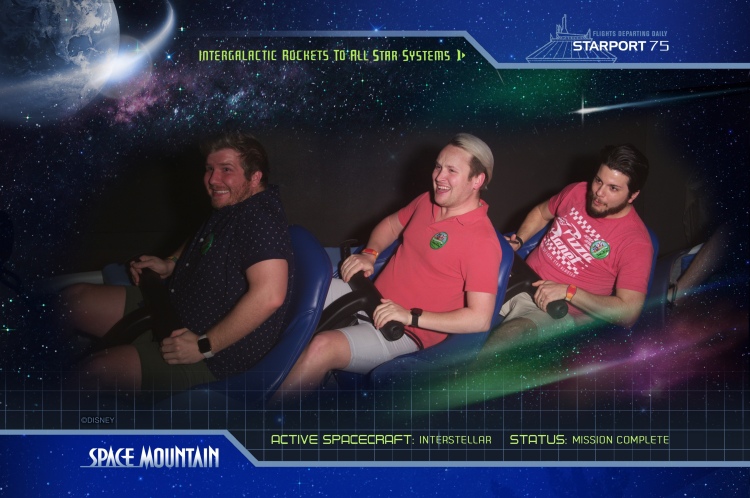 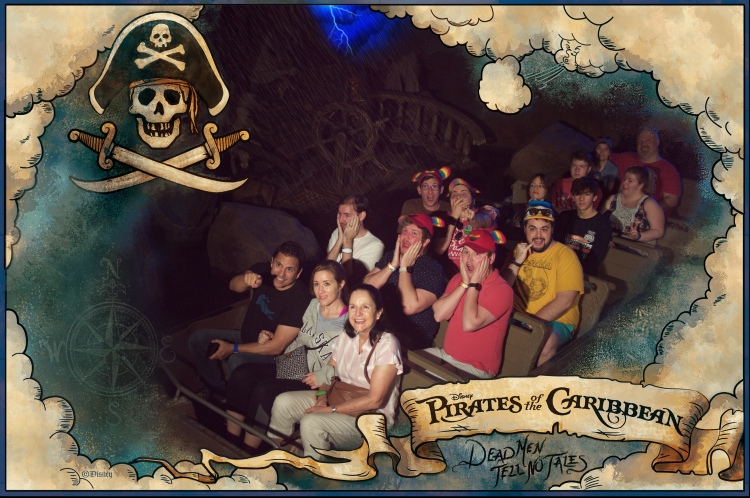 Believe it or not, the magic didn’t stop at Magic Kingdom! It was Josh’s birthday, and it isn’t a birthday with our crew until we can all have a cocktail. And the best way to enjoy a cocktail Disney-style, is to go international and drink around the world! We made our way back to the Parking and Transportation Center and hopped on a monorail over to Epcot. 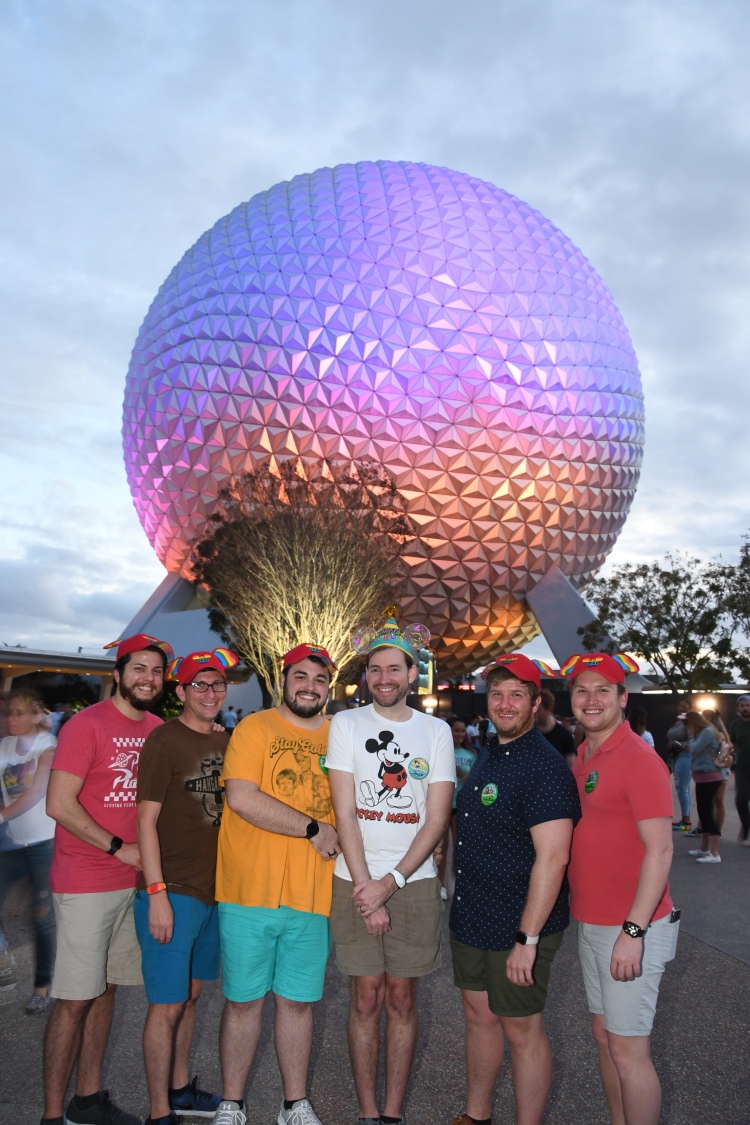 Did you know? EPCOT stands for Experimental Prototype Community Of Tomorrow. Walt  certainly had quite the dream. He had a love of nature and conservation, a deep love and appreciation for art and entertainment, and fostered an environment that makes it second-nature to love and accept each other while respecting the world around us. Epcot represents a big part of his vision.

As we entered the first section of the park, we happened across a PhotoPass experience that I’ve yet to encounter myself- one that involves long-exposure photography and a light bar! It looked a little silly in-person, but I had a feeling that the end-result would be just stunning. With a little pleading, I convinced the gang to hold off on drinks just a little longer so we could take advantage of this photo spot- I’m so glad they agreed, check them out for yourself: 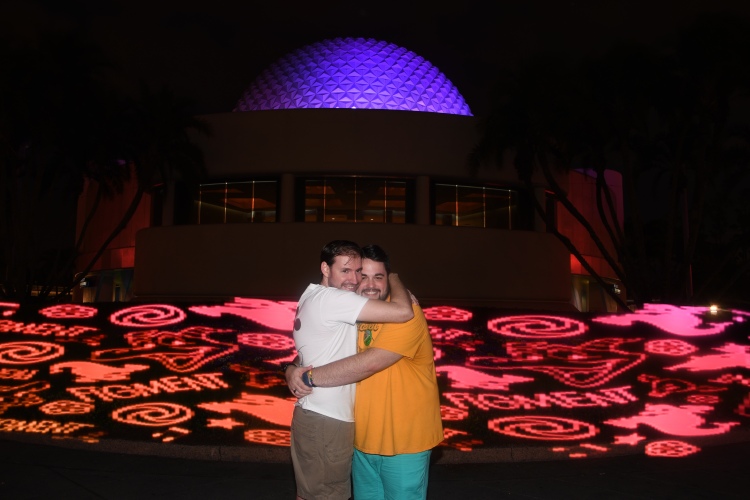 Quick note- those digital images and words behind Christian and Josh didn’t look like ANYTHING at the time the photo was taken- in fact, it’s a separate PhotoPass cast member holding an LED light bar that just looks like it’s flickering as she quickly walked back and forth behind them! 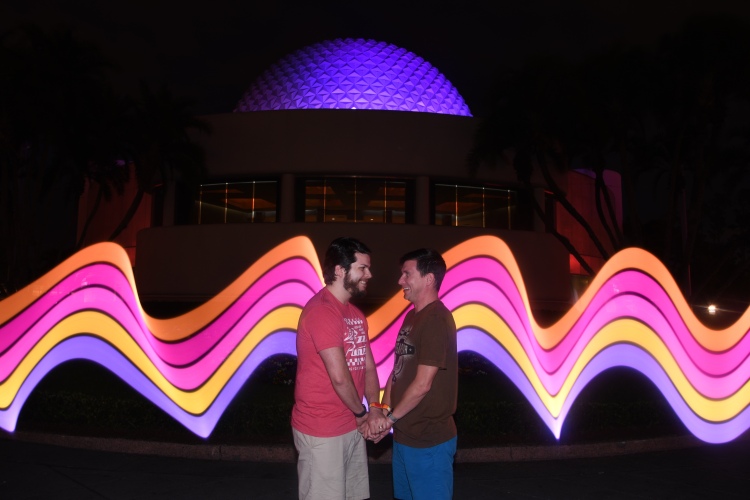 Same thing in the pictures below- there was NOT a ribbon of light behind us; instead, there was a cast member holding that same LED light bar, waving it around as she walked past us! The trick is to hold perfectly still, as the camera’s shutter remains open for a solid 6-7 seconds. 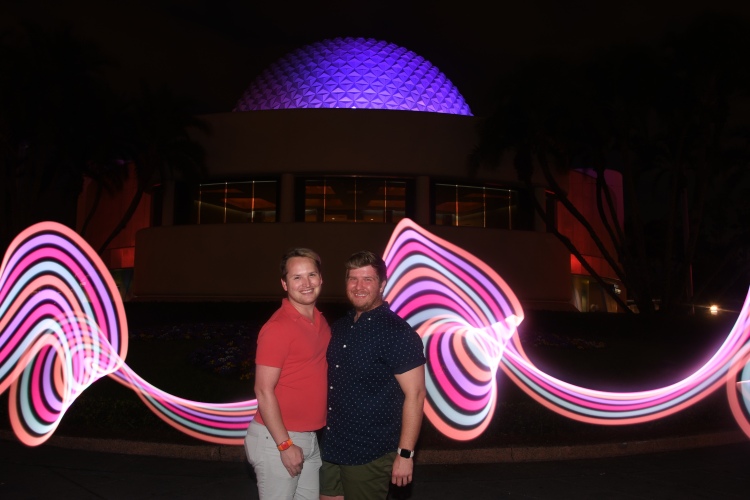 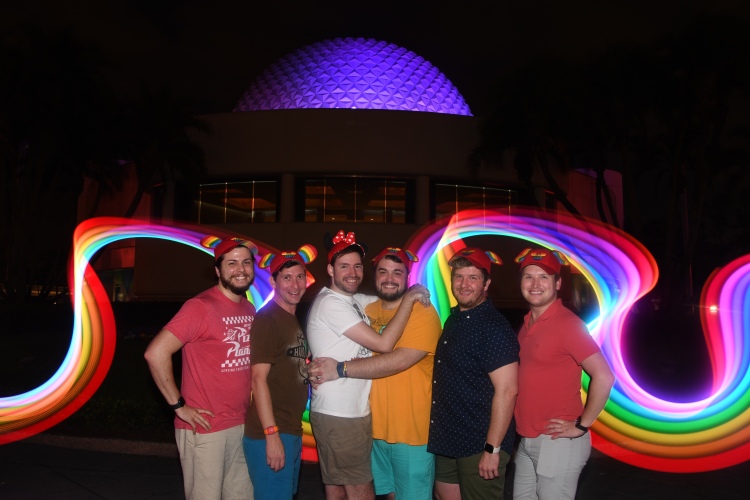 I was nearly in tears when I saw this picture pop-up on the Disney app. If you’re not aware, Disney hasn’t always been so visibly-supportive of the LGBT community. For a number of decades, there’ve been ‘Gay Days’, when members of the LGBT community go to Disney dressed in red or pride T-Shirts and sort of ‘take over’ the parks for a few days. But this has never been an official Disney event. All of the rainbow-themed merchandise only became available starting in 2018, which was still 3 years after same-sex marriage was made legal in all 50 states. It’s a little disappointing when companies and celebrities don’t speak up for you when it’s not ‘safe’ for their bottom-line, but it still filled my heart to see that rainbow ribbon glowing behind us. I made it a point to go back and show the photographer’s the fruits of their labor, and they seemed to be really happy that I did.

After our little photo shoot, we got our seasonal Annual Passholder car magnets, and headed out to World Showcase, the elegant name for ‘the countries’ at Epcot. We started in Mexico with some margaritas, before heading clockwise around Crescent Lake.

We enjoyed a few more adult beverages, before settling down near Italy for the fireworks display. Right now, Epcot is in a huge state of transition. The park will look very different in just a few years from now. In the meantime, they have phased-out updates scheduled for the front of the park, new rides opening including Guardians of the Galaxy and Ratatouille, and they even retired the fireworks show they’ve had since it’s inauguration known as “IllumiNations: Reflections of Earth”.  The current fireworks show is supposed to be a temporary one, titled ‘Epcot Forever’. There have been a number of mixed reviews by those that still hold IllumiNations near and dear to their hearts, which I understand, but there’s something very moving and exciting about ‘Epcot Forever’.

We had a very long, very fun-filled day, that ended with fireworks. We couldn’t have asked for a better way to celebrate one of our own!

I hope you enjoyed following along on our adventures at Disney in this post. Thanks for reading, and let’s stay in touch!

This site uses Akismet to reduce spam. Learn how your comment data is processed.